There are just a few weeks to go until the UN Climate Change Conference of the Parties (COP26) in Glasgow. Our climate experts are planning how we can best use our position as admitted observer at the conference to amplify the voices of the communities we work with.

The climate crisis is disproportionately affecting the most vulnerable people in the least developed countries. That’s why it’s so important that we join with them to call for strong and urgent action to address the needs of those struggling to adapt.

But you don’t have to be an attendee at the conference to make a difference. Meet the everyday climate heroes – ordinary people from the communities we work with and the UK, who are doing their bit to tackle climate change and make the world work better for everyone.

David and Abdel: The Cyclists Cycling short distances instead of driving is a good way to cut your carbon footprint. It’s also good for your health and saves money – we make that a triple win!

David from the UK is a keen cyclist. In fact that’s an understatement – while he was in his 70s, he cycled from Land’s End to John O’Groats twice to raise money for charity! Now in his 80s, he’s challenging himself to cycle the same distance again, this time in his local area. David says:

“As a Practical Action supporter, I’m passionate about helping the people most affected by climate change. I’ve set myself the challenge of cycling 1,029 miles by the end of the year to raise money to support the causes I care about.”

For Abdel in Sudan, cycling is his only way of getting to the remote farms where he treats sick animals and advises farmers on how best to care for them. His new skills, learned through our training, mean he can help farmers adapt to the impact of climate change on their way of life. Abdel told us:

“People call me and I come on my bicycle to help them. I know how to treat many diseases and infections now and I’m passing my knowledge on to others.”

Take a deeper dive into our work in Sudan on our website:

Ruzina and Natasha: The Creatives 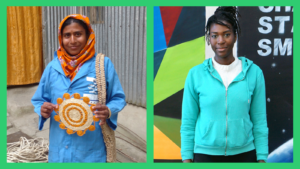 Arts, crafts and visual communication can change climate change. Everyday objects made using planet-friendly materials are both beautiful and practical. While art that carries a message of hope can inspire us that positive change is possible.

Ruzina lives in Bangladesh. This talented entrepreneur is creating beautiful bowls and clothes out of jute fibre. Jute grows very quickly and is a hardy plant that requires little water, making it perfect for the changing climate. It’s increasingly being used as a planet-friendly alternative to plastic. Ruzina told us:

“With Practical Action’s support, I learned to weave with jute. It means I can make these beautiful products and earn a living from it. I’m financially independent and able to pay for the education of my children.”

Earlier this year, street artist Natasha, from London in the UK, created an incredible installation to support our climate change work. It was a powerful example of how art can engage and inspire. Natasha says:

“As a supporter of Practical Action, I wanted to create these pieces of art to help bring more awareness to their projects across the world and also highlight the climate issues we are currently facing.”

Get creative by sharing your own artistic endeavours with Creatives for Countdown, a global organisation raising awareness of climate issues through art:

Holly and Chaha: The Conservers Water is a precious resource. With climate change causing more frequent and severe droughts in many parts of the world, it’s increasingly important that we all do our bit to consider how we can use less water.

In the UK, Holly is co-founder of the environmental action campaign Sustainable Water Use Birmingham. The group raises awareness of the impact of people’s water use and shares tips on water consumption. Holly says:

“As a young person who is already seeing how climate change is affecting people around the world, it’s difficult to even imagine the further disruption it will cause within my lifetime if we don’t take more action now.”

In Bajura in Nepal, climate change is causing more frequent droughts. With our support, Chaha is using the power of the sun to irrigate her land. Not only does Chaha’s new drip irrigation system use renewable solar power, it also uses less water than other forms of irrigation, so less is wasted. Chaha told us:

“Now that I have solar irrigation and climate-hardy seeds, I can grow more crops on my land despite the more challenging weather conditions. Before, I struggled to grow enough to eat. Now, I have enough produce to sell some at the market.”

Solar irrigation is a win-win for people and the planet. Take a deep dive into this ingenious climate solution on our website:

Genaro and William: The Coffee-lovers 1.4 billion cups of coffee are drunk every year around the world. 80% of the beans used to make them are grown by smallholder farmers. We’re working with coffee farmers in three continents so they can improve their livelihoods while protecting the environment.

Genaro is a coffee farmer living in Santa Fe, Peru. We worked with Genaro so he could make his farm more profitable while also replanting local forests. Genaro’s work reforesting the area has not only benefitted the planet – the trees and their roots slow down landslides so they’re less destructive. Genaro told us:

“I’ve learned new skills that have improved my product and I’m sharing these with my community. We have planted forests. With this project, farmers in this area have become almost like a family. We’re working together towards a shared goal.”

William lives in Leicestershire in the UK and likes experimenting with different blends in his trusty espresso machine. For William, the secret to a good coffee is as much about ethics as it is about the type of coffee beans and the fancy brewing equipment. William says:

“It’s important to me that I’m drinking coffee that comes from an ethical source. That means knowing that those producing it are making a decent living and that the farming methods don’t damage the environment.”

Want to check that your morning cuppa has come from an ethical source? This Guardian article explains what to look out for:

Are you a climate hero?

Are you doing something in your everyday life to reduce your impact on the environment and tackle climate change? Or maybe you know a climate hero in your own community? We’d love to hear your story and share it with others. Get in touch via Facebook or Twitter, or contact our friendly team.